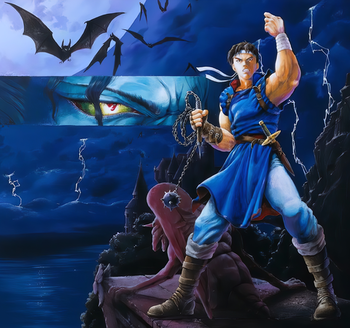 Richter flips his bird when Dracula kidnaps his girlfriend.
Advertisement:

Castlevania: Rondo of Blood (originally released in Japan as Akumajō Dracula X: Chi no Rondo) was released for the PC Engine in 1993. Initially, it was only released in Japan but it was finally ported worldwide to the PlayStation Portable with Castlevania: The Dracula X Chronicles, and subsequently to the Wii Virtual Console note Like all imports, however, this one does not have any English translation other than what was in the game to begin with., to the PlayStation 4 as part of the compilation Castlevania Requiem and to the PC Engine Mini/TurboGrafx-16 Mininote Like the Wii release, the version on the Turbografx model has no further English translation..

In 1792, the evil priest Shaft resurrects Dracula. In a rare flash of brilliance, Dracula immediately attacks the current Belmont's hometown and tries to kill him right off the bat. Richter Belmont was luckily out of town training. So, Dracula goes for plan B: kidnap Richter's girlfriend Annet/Annette, a distant relative of the Belmont clan named Maria Renard, and two other villagers.

Rondo plays similarly to previous Castlevania entries, mostly linear. However, you can also find hidden exits to reach alternate paths through the stages to fight different bosses. The ending depends on which girls you rescue, and you can play the game as Maria if you find her. You can enhance your subweapons into an Item Crash that usually fills the screen with large projectiles.

The PC Engine version was released in Super CD-ROM format, so Rondo of Blood has a redbook soundtrack and voice-acted cutscenes. This bump in production value led to Konami upping the values for their subsequent games.

A remixed port was released for the Super Famicom titled Akumajō Dracula XX (as in "Double X") in 1995, which was released for the SNES as Castlevania: Dracula X in North America and as Castlevania: Vampire's Kiss in the PAL region. While the basic plot and game system remained identical to the PC Engine, the stages were all-new and a lot more linear (with only two hidden stages) due to the lower memory capacity of the cartridge format, and unlike the PC Engine version, only Richter was playable.

an Animated Adaptation serving as a Sequel to Castlevania (2017) set during the The French Revolution was announced.

Rondo of Blood provides examples of: