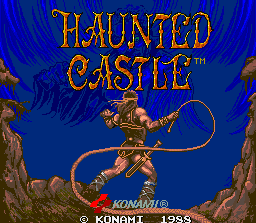 Known as simply Akumajō Dracula (the same name as the original Famicom Disk System game) in Japan, Haunted Castle was the first arcade-only game in the Castlevania series. The protagonist, Simon, has to save his bride from the reawakened Dracula. It is an original adventure, but there are quite a few unusual features in this game that never got reused: