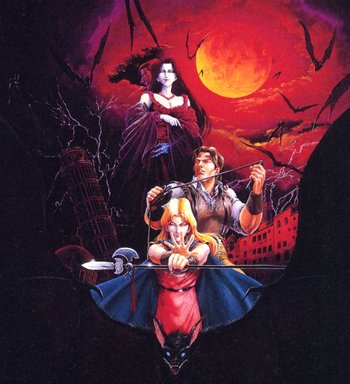 The 11th game in the long-running Castlevania series, Castlevania: Bloodlines (Vampire Killer in Japan and Castlevania: The New Generation in Europe) was released for the Sega Genesis in 1994. This game is notable for the fact that it ties the Castlevania story with that of Bram Stoker's Dracula.

It's the early 20th century, and World War I has begun. The conflict has been orchestrated by the vampire Elizabeth Bartley so she can use the countless souls of the fallen to raise Dracula from the dead. With no Belmonts in sight, the duty falls on John Morris — son of Quincy Morris — and Eric Lecarde — inheritor of the Alucard Spear — to stop Elizabeth from resurrecting Dracula once again. Their journey takes the duo all across Europe and not just Transylvania, leading to the game having some unique level locations for a Castlevania title.

Bloodlines plays like any other classic Castlevania: you proceed through a linear gauntlet of enemies and platforms to reach the end of each stage and fight the boss. While John and Eric visit the same levels, John's whip swing and Eric's vaulting high jump grant them access to different paths, increasing the replay value.

The storyline of Bloodlines continues in 2006's Castlevania: Portrait Of Ruin.

Strangely, compared to contemporary console Castlevania games, Bloodlines suffered from a dearth of ports/rereleases until 2019, when SEGA announced the SEGA Genesis Mini

, with Bloodlines being one of the first titles to be revealed, and when Konami announced Bloodlines as part of Castlevania Anniversary Collection. This game is also one of the included games in Nintendo Switch Online's library of Sega Genesis games.