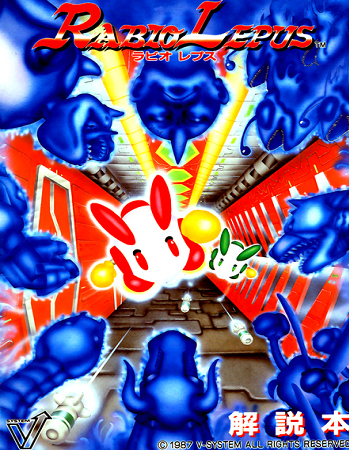 Rabio Lepus (Known as Rabbit Punch in America) is a horizontal Shoot 'em Up made by Video System in 1987. Video System would later be known for the Aero Fighters series.
Advertisement:

The plot has the royal family of Bunnyland, which are Princess Kodomo, her sister Kotomi, and the King Taro Kitashirakawa, kidnapped by a legion of monsters and you play as two bunny ships, Rabio (Red Rabbit) and Lepus (Green Rabbit) to save them. The game is split into three parts, the enemy's spaceship, the asteroid base, and their base on the surface of the planet.

It can now be played online here