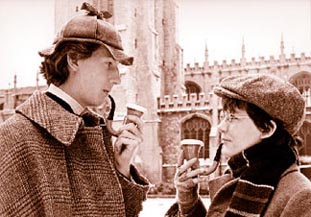 "The following story is original and is not specifically based on the exploits of Sherlock Holmes as described in the works of Sir Arthur Conan Doyle."
—Opening Disclaimer
Advertisement:

A 1985 mystery/adventure film directed by Barry Levinson, Executive produced by Steven Spielberg, produced by among others Henry Winkler (yes, that one.) and written by Chris Columbus, and based on the classic characters of Sir Arthur Conan Doyle. An admittedly non-canonical What If? story, it depicts a young Sherlock Holmes and John Watson meeting and solving a mystery together at a boarding school.

It was the first film produced by Amblin Entertainment to receive a PG-13 rating, and notable for including the first fully computer-generated character: a knight composed of elements from a stained glass window. The effect was created by Lucasfilm's new computer graphics division headed by a then-up-and-coming John Lasseter, which would later become Pixar. The SFX earned the film an Academy Award nomination, but was beaten by Cocoon.

No connection to the Young Sherlock Holmes novels.