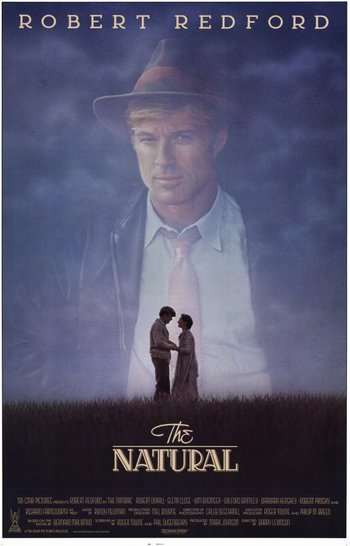 Roy Hobbs: I coulda been better. I coulda broke every record in the book.
Iris Gaines: And then?
Roy Hobbs: And then? And then when I walked down the street people would've looked and they would've said 'there goes Roy Hobbs, the best there ever was in this game'.
Advertisement:

A 1984 film based on the 1952 novel by Bernard Malamud, directed by Barry Levinson and starring Robert Redford as Roy Hobbs, a supernaturally gifted young baseball talent whose career is derailed when he is shot in the gut by a deranged fan (Barbara Hershey). Sixteen years later he makes his belated big league debut, but his dark secret threatens to destroy him.

Notable as the first film to be produced by TriStar Pictures (but not the first released, as that honor goes to Where the Boys Are '84).