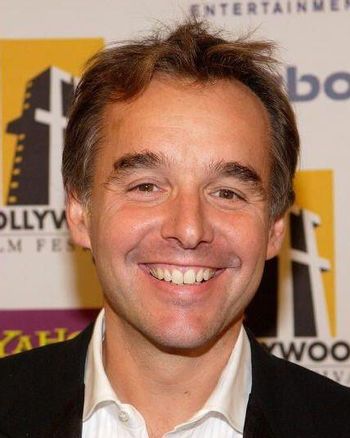 No, not that Chris Columbus.
Advertisement:

Christopher Joseph Columbus (born September 10, 1958) is the guy who directed Home Alone (and the first sequel, Home Alone 2: Lost in New York), Mrs. Doubtfire, the first two Harry Potter films, the movie version of RENT, and the movie of Percy Jackson and the Olympians. A protégé of Steven Spielberg, Columbus started off as a screenwriter in The '80s, during which time he wrote the scripts for Gremlins, The Goonies and Young Sherlock Holmes. He got a reasonably good start as a director in 1987 with Adventures in Babysitting. And, no, we don't know what the hell his parents were thinking.

Is well-regarded as being a great director of young children, especially in films where they carry a bulk of the film. His work with Macaulay Culkin in Home Alone gave him an edge in getting the Harry Potter gig, as they needed an experienced hand with three children (for two of them, it was their feature film debut) who were going to carry most of the film's two-and-a-half-hour running time then an entire franchise growing up. Has also hit box-office gold like few directors have; at various points in his career, he's had the third-highest-grossing domestic film of all time (Home Alone), the TWO highest-grossing live-action comedies of all time (Home Alone and Mrs. Doubtfire, which also won a Golden Globe for Best Picture- Musical/Comedy), and then the second-highest-grossing film worldwide of all time with the first Harry Potter film (all have been surpassed since).

Some have noticed similarities between Young Sherlock Holmes and the Harry Potter series (both being about a trio of students solving a mystery at a British Boarding School full of eccentric professors) and noted what an odd six-degrees twist it would be if J. K. Rowling had been influenced by the film. Reportedly, the script of Young Sherlock Holmes was even used to audition actors for the first Potter film.

Columbus's production company 1492 Pictures has also produced several movies he did not write or direct, such as the Night at the Museum series and the 2005 Fantastic Four plus its sequel.

Common tropes in his movies: