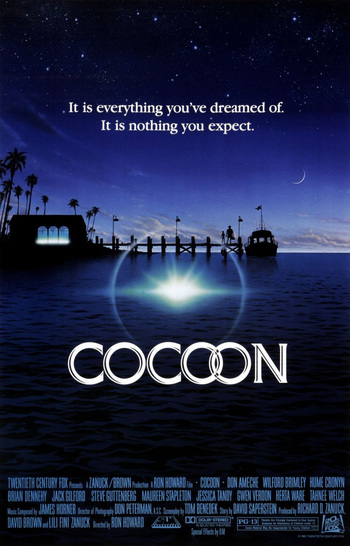 "It is everything you've dreamed of. It is nothing you expect."
— Tagline
Advertisement:

A group of trespassing senior citizens get more than they bargained for when swimming in the neighbors' pool restores their health and gives them youthful vigor. Unbeknownst to them, a group of aliens called Antareans are on a search-and-recover mission to retrieve twenty cocoons containing their crew mates from the ocean floor, and are renting that house and using the pool to store their cocoons. When the two groups come together, everyone involved has to make major decisions that will affect their futures.

Followed by a 1988 sequel (Cocoon: The Return), which was not directed by Ron Howard but did reunite the entire original cast.