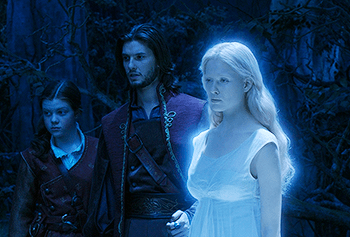 "What do stars do? They shine."
— Yvaine, Stardust
Advertisement:

A character occupies a special place in the story: This character is either exceptionally powerful, exceptionally pure or both. A quick visual shorthand to note this specialness is to have the character glow. Unlike a Holy Backlight, this glow is not from an external source but originates from within the person himself. The character does not necessarily glow all the time; often, the glow is visible only in certain circumstances or to certain people.

Glowing can be used to signify when someone is about to Ascend to a Higher Plane of Existence (or already has done so). Often, the glow is white, drawing on that color's associations with purity.

While villainous examples are possible (sometimes with a "bad-coloured" glow, such as red or sickly radium-watch green), most frequently the glowing person is on the hero's side.