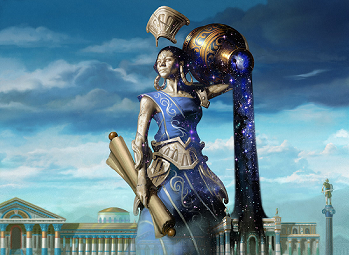 "The Ethiops say that their gods are flat-nosed and black, while the Thracians say that theirs have blue eyes and red hair. Yet if cattle or horses or lions had hands and could draw, and could sculpt like men, then the horses would draw their gods like horses, and cattle like cattle; and each they would shape bodies of gods in the likeness, each kind, of their own."
— Xenophanes, commenting on this trope.

Most gods in your typical divine pantheon seem to be Anthropomorphic Personifications of natural forces or endeavors and rule over those aspects; thus you have a god of war, a god of thunder, a god of running around and jumping and stuff. There might also be gods of specific places— see Genius Loci, though not all cultures consider their genii to be gods. Another common type of god is associated not with an abstract concept, but with a discrete ethnic group or tribe of people, who take a god (or small group of gods) as their patron.

A reciprocal relationship naturally enfolds: the god protects the tribe from supernatural threats and appoints leaders to deal with secular problems, while the people give up offerings or prayers. This might mean that Gods Need Prayer Badly and this one has found a cozy niche, or else that there is an immutable, vital connection between the two parties, and if one is destroyed, the other will necessarily fall to ruin. In the latter case, it's assumed that one entity specifically created the other. In other cases, this relationship may simply be due to a more mundane pact or a matter of personal favor. Members of the tribe (all, or just a chosen few) may be able to direct the god's power to their own designs (see Theurgy). When groups come into conflict, their gods get involved, and things can escalate into a celestial war quickly. Some gods are even evangelical, and want everyone to be converted to their worship, while others are only concerned with the needs of their chosen race.

Ethnic gods may be cobbled together into a single pantheon when their representative tribes form a civilization or empire. In that case, the Top God is probably the original god of the ruling tribe, and a lot of Odd Job Gods emerge, taking up whatever traits their people ascribed them and representing those within the pantheon.

Not to be confused with God being portrayed as a specific ethnic group: see Divine Race Lift.