Hordes from the East 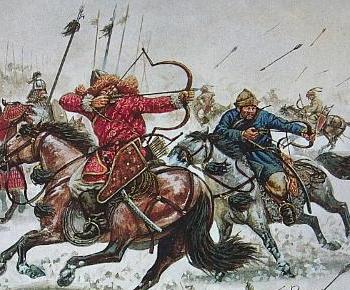 "From the chaos comes form and order
From the many comes the one
Out of the east prowl upon the borders
Come to crush and overrun"
— Miracle of Sound on Caesar's Legion, "Mojave Song"
Advertisement:

They're strange. They're foreign. They come from the East. And there's a lot of them. Maybe it's because they're Always Chaotic Evil, or maybe we're just next in a line of civilizations to be conquered, but they're out to get us.

This trope arose a long time ago from bad experiences and sometimes just general xenophobia. While the more bigoted aspect of the trope is no longer fashionable, it still survives thanks to Follow the Leader and the need for an easy source of danger and disposable enemies. Internal life of the hordes isn't usually depicted much, if at all. They are foreign, they are evil, and that's all that matters.

"The East" comes from the typical placement of the "others" in Real Life Western Europe. The usual candidates for the hordes include Muslims (take your pick from Turks, Arabs, or general "Moors"), Mongols, Huns, Hungarians, Scythians, Russians, or Fantasy Counterpart Cultures of them. Like several of these cultures, they're likely to have been Born in the Saddle. They'll sometimes look stereotypically Asian or "Turanid

" (an obsolete term to indicate Central Asian populations with mixed Caucasian/Asian traits), but they aren't criminal masterminds like the Yellow Peril - they're just a mass of Mooks born to be mooks.

A culture can even be on both sides of the trope. Russians are a source of Hordes for Western Europe, but they themselves endured Mongol control for some centuries - it's a popular trope in Russian folk tales.

Some cultures have their own tropes involving attacks from a particular direction. For example, an attack would have always come from the North/West in China, from the North-West in India, and from the North in Rome. Another variant is to have hordes from up north, Vikings or Norse barbarians.