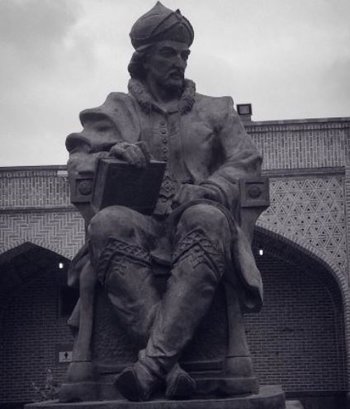 Statue of Ismail I in Ardabil, Iran
My name is Shah Ismail. I am God's mystery. I am the leader of all these ghazis.
My mother is Fatima, my father is 'Ali; and eke I am the Pīr of the Twelve Imams.
I have recovered my father's blood from Yazid. Be sure that I am of Haydarian essence.
I am the living Khidr and Jesus, son of Mary. I am the Alexander of (my) contemporaries.
Look you, Yazīd, polytheist and the adept of the Accursed one, I am free from the Ka'ba of hypocrites.
In me is Prophethood (and) the mystery of Holiness. I follow the path of Muhammad Mustafā.
I have conquered the world at the point of (my) sword. I am the Qanbar of Murtaza 'Ali.
My sire is Safī, my father Haydar. Truly I am the Ja'far of the audacious.
I am a Husaynid and have curses for Yazīd. I am Khatā'ī, a servant of the Shāh's.
—-Ismail's poetry
Advertisement:

Born in 1487, Abu'l-Moẓaffar Ismā'īl ibn Shaykh Ḥaydar ibn Shaykh Junayd was the Shah of Iran and founder of the Safavid Empire. If Cyrus the Great was considered the founder of ancient Persia, then Ismail is this for post-Middle Ages Persia and one of the most vital rulers in its history. For most of the Middle Ages, ever since the Muslim conquest of Persia by the Rashidun Caliphate in 654, Persia was governed by a succession of different foreign rulers like the Umayyads, Abbasids, Seljuks, Mongols, Timurids and, at the time of Ismail's birth, a confederation of Turkic tribes. Ismail's father Sheikh Haydar claimed descent from Ali ibn Abu Talib, the cousin and son-in-law of The Prophet Muhammad, and lead a Shia Islam movement known as the Qizilbash (Redheads) against its Turkic rulers. Haydar was killed when his son was just a year old, who went into hiding in Gilan where he was raised by scholars. He began his military campaign at 14, starting by taking revenge against his father's killers, the rulers of Shirvan. He established the Safavid state in the following year, and by the next decade, he had conquered the entirety of Iran, Mesopotamia, Armenia, the Khorasan and Eastern Anatolia with the Georgians as his vassals. For the first time, Iran was unified under a native ruler with a devoted following, which can be attributed to Ismail being regarded as a Muslim saint, the reincarnation of Ali and the Mahdi himself.

However, he soon found his match in the Ottomans led by the sultan Selim the Grim. Being Sunni Muslims, the Turks were alarmed by the Shia advance and the influence that Ismail had over the Qizibalish throughout the region. Selim had such a virulent hatred against the Shia that, in a quick power play, he forced his father to abdicate and later arranged his death alongside his brothers, so that he could begin a war against the Safavids. He launched a brutal campaign of persecution against any Shia he could get his hands on, accusing them of being Safavid conspirators and killing over 40,000. Ismail and Selim declared war on each other and marched to battle in Chaldiran located in Northern Iran. Unfortunately for the young Shah, the Ottomans were not only numerically superior but also had plenty of firearms at their disposal, while his own men only had cavalry at theirs. The Safavids were completely crushed, and the Ottoman Turks sacked and pillaged the Persian capital, Tabriz. Selim captured all of the Shah's wives and concubines, with his favorite wife Tajlu Khanum being married off to one of the sultan's generals and Ismail never seeing her again. The loss of his beloved completely shattered Ismail's resolve, and he retreated from all military and state affairs since his supernatural aura was destroyed. Ismail himself died shortly afterwards at the young age of 36. Nevertheless, the Safavid state was kept from collapsing by his son Tahmasp, who succeeded him as Shah and managed to reassert order, and later on by his grandson Abbas, who would further strengthen and finalize his dream.

His most important legacy was establishing Twelver Shia Islam as the state religion of his domain. He had personal reasons, since he hated Sunnis for killing his father and older brother, but also had a practical side: he could create a distinct and unique identity for Iranians to stand out from their Sunni rivals and prevent a possible Sunni fifth column from within his subjects. This process would not be peaceful, and much of it was spread by the sword: Ismail enforced the compulsory cursing of the first three caliphs Abu Bakr, Umar and Uthman (mirroring the Umayyad tradition of cursing Ali), imprisoned and executed Sunnis unwilling to convert to Shiism and destroyed and desecrated Sunni mosques and tombs — even European ambassadors were astonished how he could renovate Christian churches while at the same time destroying Sunni heritage.

Nevertheless, Iran didn't embrace Shiism immediately, it was a gradual process that was only completed by the 1700s and, even after the Safavid dynasty ended, attempts by the succeeding Nader Shah to reverse Iran back to Sunnism failed and they continued being Shia. This was a turning moment in Islamic history: since the fall of the Fatimid Caliphate at the hands of Saladin Ayyubi during the Crusades, Shias were once again in control of a large empire instead of being a minority in Sunni-dominated states, Twelver doctrine became the most dominant form practiced in Shia Islam, outnumbering the formerly dominant Zaidiyyah sect (dominant in Yemen), and the establishment of the Safavid state greatly hindered Ottoman advance into Europe, as they spent too much time warring with the Persians. It also left several consequences, such as Iraq and Azerbaijan being Shia-majority while they were part of Iran, and Afghanistan having a sizable Shia population with the Hazara people.

Today, Shia Islam is considered inseparable part of Iran (though this can be attributed to its current government since the Islamic Revolution) as the word "Safavid" itself is used as a slur directed to Shia Muslims (particularly used by Sunni fundamentalists and jihadists) — and it all can be traced back to Ismail I's policies.