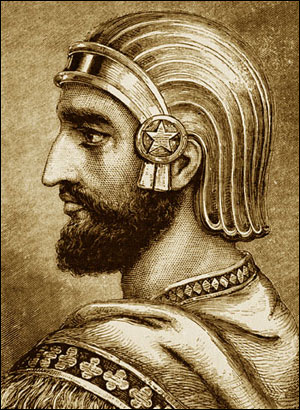 In scope and extent his achievements ranked far above that of the Macedonian king, Alexander who was to demolish the empire in the 320's (BC) but fail to provide any stable alternative.
—Charles Freeman, The Greek Achievement
Advertisement:

Cyrus (Persian: Kūruš, circa 600 – circa 530 BC) was one of the most famous rulers in history. He was born a prince of a recently-settled Iranian tribe, the Persians. According to a legend (a variation of one familiar in biographies of conquerors), at Cyrus' birth, Astyages, Cyrus' grandfather and king of the Medes (a neighboring Iranian tribe of whom the Persians were vassals), heard in a dream that Cyrus was destined to seize his kingdom, whereupon Astyages ordered the baby abandoned. He was found by a herdsmen and raised as a son. Eventually, he proved himself as a warrior and came back to avenge himself. The more probable version of his story is that he had always been a prince and later vassal king. In any case, in a series of campaigns, he made himself king of the Medes as well. From there he began a life of conquest that spread until he had the largest and perhaps most successful empire yet created in the world, The Achaemenid Empire.

One of the most notable things about Cyrus was his skill not just as a warrior, but also as a politician. Previous conquerors had ruled by fear alone. Cyrus grasped the fact that if he was magnanimous and made enough Pet the Dog gestures to his new subjects, he would win their willing submission from comparison with the probable alternatives. In essence he conquered as much through bribery as through war. It would probably be overly cynical to say that this was all Pragmatic Villainy. Being a gracious conqueror (by comparison) seems to have fit his personality so well that there was some truth to it. Among the most famous of his gestures was encouraging the resettlement of the Jews in exile in Babylon. This got him a curious place in The Bible as the only Gentile prince to be specifically named as a deliverer of Israel.

Tropes as portrayed in media: