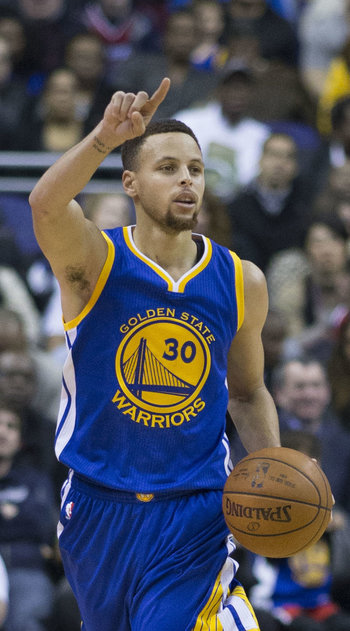 The Baby-Faced Assassin
"Something or someone has blessed him with a golden touch."
— Jim Barnett, color commentator for the Golden State Warriors
Advertisement:

Wardell Stephen "Steph" Curry II (born March 14, 1988) is an NBA guard for the Golden State Warriors. The son of former 3-point specialist Dell Curry, he holds both the NCAA and NBA records for 3-pointers made in a season, as well as the NBA record for three-point shots made of all-time with over 3,000 already made. Along with winning the NBA MVP award in 2014-15 and 2015-16, he led the Golden State Warriors, a long-suffering franchise before his arrival, to the NBA championship, followed by the team setting the single-season wins record with 73 the following year.

In addition to basketball, he's a keen golfer and is the resident golf pro on Holey Moley, which he also executive produces. Curry also provided the startup funding (six years' worth!) for new men's and women's golf programs at Howard University, a historically black institution in Washington, D.C.; the new teams began play in 2020–21.