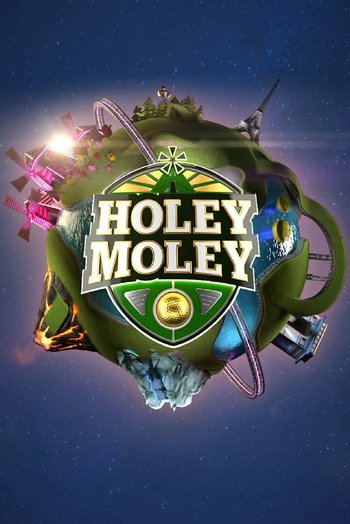 Putt up or shut up.
"Welcome to the Thunderdome of mini golf."
— Rob Riggle
Advertisement:

Holey Moley is a series on ABC created by Chris Culvenor that premiered in 2019. It pits various miniature golf pros and enthusiasts alike against a mini-golf course taken to the extreme with super-sized challenges and obstacles to conquer.

All of the contestants seek the coveted $25,000 grand prize, along with a snazzy plaid jacket and golden putter. With two large ham announcers, Joe Tessitore and Rob Riggle providing cheesy commentary and a lot of self-deprecating humor about contestants and the game, it values fun and camaraderie above all else.

The series returned the next year for a second season as Holey Moley II: the Sequel, with even more wacky gimmicks, a slimmer number of golfers to accelerate the game's progression, and a championship putt for $250,000 at the end of the competition. Third and fourth seasons have been ordered, with the third releasing in 2021 as Holey Moley: 3D in 2D.

On January 21, 2021, Rob Riggle, Joe Tessitore, and Jeannie Mai appeared on Celebrity Wheel of Fortune to compete for charity.