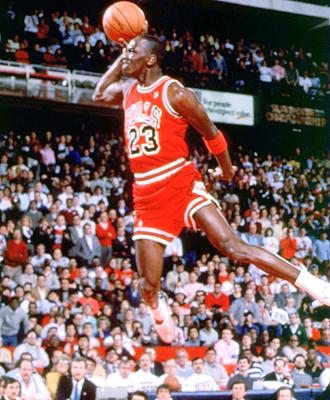 His Airness in flight.
"I've missed more than 9,000 shots in my career. I've lost almost 300 games. 26 times, I've been trusted to take the game-winning shot and missed. I've failed over and over and over again in my life. And that is why I succeed."
—Michael Jordan

Michael Jeffrey Jordan (born February 17, 1963) is a former Basketball player for the Chicago Bulls and Washington Wizards. One of the greatest, if not the greatest player to ever play the game, due to his skill, leadership, eye-popping highlights, charisma, and general professionalism. Indeed, during his career the younger generation tended to root for him despite having no Chicago ties whatsoever. In addition his stardom gave way to a massive endorsement enterprise including Wheaties, Gatorade, McDonald's and his massively popular "Air Jordan" Nike basketball shoes. He is now the owner of the Charlotte Hornets, the NBA franchise in Charlotte, North Carolina and the co-owner of the NASCAR team 23XI Racingnote pronounced as "Twenty-Three Eleven Racing" alongside veteran driver Denny Hamlin.

In fiction he starred in a series of Looney Tunes / Nike crossover commercials and that led to the 1996 film Space Jam, and has also been featured in several video games, including Michael Jordan: Chaos in the Windy City, and NBA 2K from 2K11 onward. He can also be seen doing commercials for Hanes underwear. In 2020, ESPN and Netflix aired a ten-part documentary series titled The Last Dance, which covered Jordan and the Bulls' 1997–98 season and pulled in huge ratings.

As always, The Other Wiki has more information on him. But if you need some cold hard reasons why modern players want to retire his number altogether (the Miami Heat retired his number, even though Michael never played for them), you can peruse this list of accomplishments

Not to be confused with the actor Michael B. Jordan.

You're still browsing TV Tropes? Stop it. Get some help.
Feedback