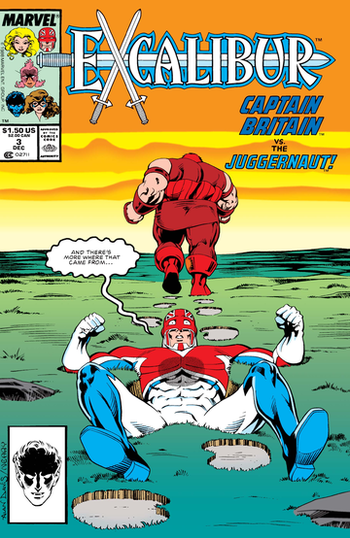 "Juggernaut" is a word meaning "unstoppable". The Juggernaut is just that. It is often fixated on a goal, reaching somewhere that it shouldn't be, trying to accomplish something that the heroes don't want it to accomplish. In any case, it is moving ever and continually forward, letting no one and nothing stand in its path. A Groin Attack? Try again. Bullets? Pathetic. Rockets? Barely noticeable. Nuclear bombs? Might make him flinch,* if only from the flash but don't expect the flames to stop him — and that's if you're lucky. The group of powerful heroes we've been following are nothing more than the Redshirt Army to this thing. You Shall Not Pass!? It's going to. And it's ever, continually moving forward. You can taste the invulnerability of this thing.

It also helps the illusion of unstoppability if The Juggernaut is also The Voiceless. If physical attacks don't slow it down, then talking it down isn't going to work, either. It sometimes won't even attack, preferring to just plow forward, as if the defenses trying to stop it aren't even there. Those determined to make you fear them or mock your inability to scratch them will take their time. Stopping this thing usually requires a last second gambit, or a Deus ex Machina to defeat. If it ever appears again, Villain Decay is almost certain. After all, if the unstoppable is stopped once, that means it's not unstoppable anymore, right? An epic Not So Invincible After All moment will usually occur in the process.

Compare and contrast Foe-Tossing Charge, the usually heroic version of this trope. Any Beast of the Apocalypse worth its salt is probably going to be this. Also compare the Determinator, who is powered by the sheer force of will. Compare Implacable Man, which can be stopped, but only temporarily, and will usually find ways to get past obstacles without simply destroying them; for example, if they encountered a wall, the Juggernaut would simply smash through it, while the Implacable Man would take the time to cut through or scale it. This may create a sense of false security in the Implacable Man's quarry that does not exist when dealing with a Juggernaut.

Compare Super-Persistent Predator, and the Perfect-Play A.I., which usually applies only in gameplay terms. For those who manage to defeat a Juggernaut, it's Defeating the Undefeatable.

Not to be confused with the 1974 film Juggernaut, which is about an extortionist who has planted time bombs on a cruise ship.

Note: While the X-Men villain the Juggernaut certainly fits this Trope, much more detailed information can be found about him on this page here.

Vader proves unstoppable to the rebel soldiers as he slowly advances toward them, and all they can do is run away.

Vader proves unstoppable to the rebel soldiers as he slowly advances toward them, and all they can do is run away.