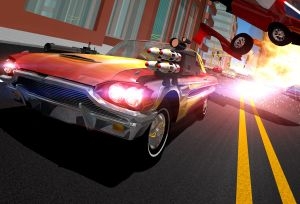 Cut me off and die.
"N. Gin opened a custom auto parts store in Toledo, Ohio. The store closed after a massive recall when his patented "Clear-the-Road" missile system sparked havoc on the nation's freeways."
— N. Gin's "Where Are They Now?" Epilogue, Crash Team Racing
Advertisement:

A lot of the time, it is not enough for your Cool Car to simply be cool. Having extra measures in place in order to facilitate the capture of the enemy you're chasing, or your escape from the enemies chasing you, might not only be helpful, but necessary. Enter the Weaponized Car. Equipped with both offensive and defensive measures, this item is a must-have for the discerning Badass Driver. Many options are available, but the standard loadout includes:

Reinforced armor, bulletproof glass, and a turbocharged engine are also pretty standard, for obvious reasons. Weapons like machine guns and missiles can almost always retract into the car in order to keep a low profile in settings where this is necessary. Vehicles with pintle-mounted weapons, such as military HMMWV's, do not count(unless you also make the above modifications); a Weaponized Car typically only needs one driver for complete functionality (This does not stop some cars from having them, however).

Sub-Trope of Cool Car. Not to Be Confused with Car Fu, which is where the car itself is turned into a weapon. See Vehicular Combat for the game genre based around a bunch of these blasting the crap out of each other. Wacky Racing may also involve these.