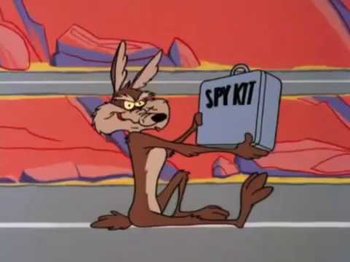 It looks like just another day, another chase for Wile E. Coyote and the Road Runner. Just as he’s about to catch his target, the Coyote gets hit with a mystery briefcase. It turns out to be a Spy Kit, tossed out by a black-clad fugitive being chased on the open road by a patrol car. Intrigued by the prospect of new (non-ACME) resources, he gets right down to business.

Naturally, he gets Hoist by His Own Petard no matter what he uses. Whether it’s sleeping gas, a packaged time bomb, a fuse linked to explosive mastic on a boulder, plans for the type of car the fugitive used, or some remote-controlled missiles, the end result never varies.

It is notable for being the final classic-era cartoon to feature the pair — the latter of two directed by Robert McKimson and the 14th not directed by Chuck Jones.