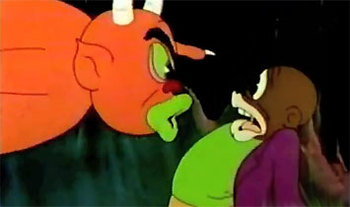 In a poor, Southern black town, as many of its residents get dressed for church (or "Sunday go to meetin' time"), a lazy, black man named Nicodemus would rather spend his Sunday shooting craps. When his wife catches him trying to skip church, Nicodemus runs off and tries to club a chicken...until he gets hit by a fence post and gets sent to Hell where the Devil himself goes over all of Nicodemus' sins.

Like most of the really early Warner Bros. shorts, this one isn't all that memorable, besides the title song, the dream sequence where Nicodemus is in Hell, and the fact that the outdated African-American stereotypes have put it on the infamous Censored Eleven list. It is easily available online, even though it's never been released on home media or streaming (and probably never will be).