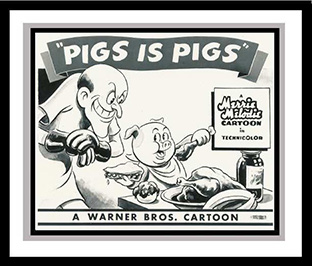 Feed me!
"Hungry, my little man?"
— The scientist

"Pigs Is Pigs" is a 1937 Looney Tunes short, directed by Friz Freleng. It stars a cute little piglet named Piggy, who loves food so much that he steals it off the table and never gets full. However, the little fellow bites off more than he can chew when outside the safety of his mother's home, he is invited into the home of a mad scientist. Here, he gets more food than he could've ever dreamed...

Noted as one of the most (in)famous Looney Tunes shorts of all time, particularly for both its horror and marvelous originality with the feeding sequence, "Pigs Is Pigs" has often been parodied in pop culture, including a Shout-Out in the fourth Treehouse of Horror in The Simpsons (Matt Groening even said the feeding sequence was his favorite animated sequence in history). "Pigs Is Pigs" is also the last short to feature Piggy and the Hamhock family as a whole.

No relation to the oneshot Disney short of the same name.

"Pigs Is Pigs" provides examples of: