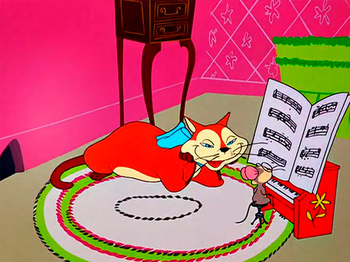 That is one unusually talented rodent!
Advertisement:

Pizzicato Pussycat is a 1955 Looney Tunes short directed by Friz Freleng. In it, a suburban couple named John and Vy Jones keep hearing piano music playing from within the house but have no idea where it's coming from. Coincidentally, their (unseen) daughter Mary Lou's toy piano has been missing for days. Meanwhile, the house cat catches a mouse... only for that very mouse to reveal that he's the pianist who's been playing Mary Lou's piano for the last few days. When the Jones's come inside the room, the cat abruptly hides the mouse in their grand piano and pretends to play it. Amazed, Vy calls the press, and the starry-eyed cat agrees to spare the mouse's life if he can continue to be the former's musical puppet. Unfortunately, the cat and mouse team's big concert turns out to be a disaster when a mishap exposes the cat as a fraud. Things temporarily return to normal with the cat chasing the mouse... until the cat accidentally discovers that he has a talent for drumming after trying to smack the mouse with a set of drumsticks. The cartoon ends with the cat and mouse playing upbeat jazz music together, while the Jones decide to keep their unusually talented pet duo a permanent family secret.