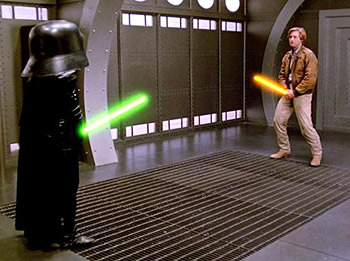 "I see your Schwartz is as big as mine. Now let us see how well you handle it!"
Téa: Wow, look at all the phallic imagery!
[montage of monsters growing horns, getting existing horns enlarged, and a knight with a long hard cold lance]
Joey: What're you talkin' about, Téa? There ain't anything remotely suggestive about this duel!
Yami: Now quiver in fear as my mighty lance penetrates your moist cocoon!
— Yu-Gi-Oh! The Abridged Series
Advertisement:

Visual counterpart to Innocent Innuendo. Someone does something that is innocent on the surface, but can have very dirty connotations.

It generally has several common forms:

The source of most supposed (and very few literal) attempts of Getting Crap Past the Radar.