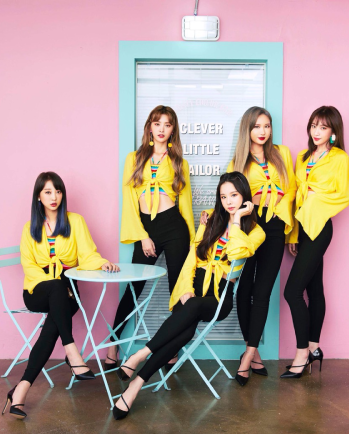 from left to right: Hyelin, Jeonghwa, Solji, LE, Hani
Who's that girl?
EXID!
Hello, we are EXID!
Advertisement:

EXID is a 5-member Korean Pop Music group managed by Banana Culture (formerly Wellmade Yedang) Entertainment. The group debuted in 2012, and initially experienced very limited success, all while enduring the loss of three members and the addition of two new members.

In 2014, EXID debuted the single "Up & Down" after a two year hiatus. After a fancam of member Hani performing the song went viral, their popularity skyrocketed. Their 2015 follow-up single "Ah Yeah" was also a hit, and since their newfound success, EXID has received much more attention in Korean and international media.

In addition to their music, they also have also starred in or made appearances on several Korean variety shows. They also have a recurring video blog show called ButBut TV which is produced by the girls and their management, and available on their YouTube channel.