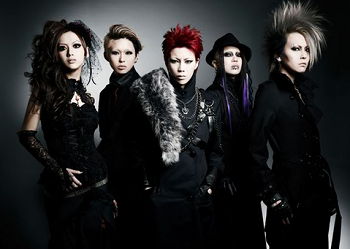 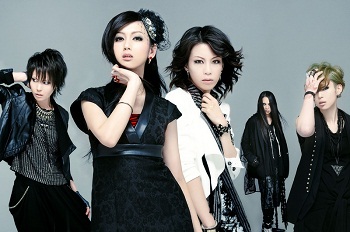 The band in 2013. From left to right: Omi, miko, Jyou, Naoto, and Mally
Advertisement:

exist†trace are an all-female Visual Kei band formed in Tokyo in 2003. The band was initially a quartet until Mally joined the band in 2004. They started off playing Melodic Death Metal/Gothic Metal, but have softened a bit over the years, with more emphasis on the "melodic" part than the "death" part—although, during live shows, they still perform their earlier melodeath songs alongside their more recent Hard Rock songs.

In June 2012, exist†trace performed a special concert, entitled "JUST LIKE A VIRGIN", which was broadcast live worldwide on Nico Nico Douga; a month later, the band announced that the concert would be released as their first live DVD.

Tropes which apply to exist†trace: