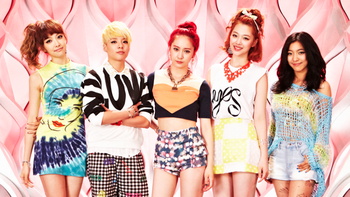 f(x) is a South Korean Pop Music Girl Group formed in 2009 by SM Entertainment. The name is a play on the mathematical notation for function, with "f" signifying "flower" and "x" representing the female's double X chromosome. The group members have also been nicknamed "function girls".

The quartet consists of Victoria, Amber, Luna, and youngest Krystal, who is coincidentally the younger sister of former Girls' Generation's Jessica.

Former member Sulli went on a hiatus from mid-2014 due to the stress of dealing with malicious internet comments about her, and eventually she officially withdrew from the group in August 2015 to focus on her acting career. Tragically, she committed suicide in October 2019

due to the non-stop hate she had received from the general public.

The group debuted on September 5, 2009 with the release of the single La Cha Ta. The lead single off their album Pinocchio gained their first music program win and was their first song to win the triple crown.

f(x) became the first South Korean group to perform at SXSW and they also did a video with actress Anna Kendrick for Funny Or Die.com, both events of which has more or less garnered attention to f(x) in the US.

Following a three-year hiatus, Amber made an announcement on September 1, 2019 that she had not renewed her contract with SM Entertainment. Four days later, SM announced that neither Luna nor Victoria had renewed their contracts. When asked if that mean the group had disbanded, Amber said that the group had no intentions to reunite, continuing "[w]hether we do music or not, I think there will be a time when we can but I think right now we’re just figuring ourselves out. We have no plans, but it’s never not an option." On August 18, 2020, Krystal was reported to have parted ways with SM Entertainment, although SM claimed that their exclusive contract with Krystal expires in late August and that they will continue to have discussions with Krystal about renewing the contract.

In 2022, Luna was cast as the lead in the Broadway musical KPOP.

For the network owned by Disney, see FX Networks.