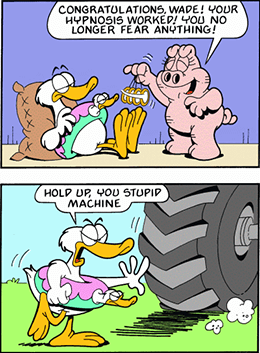 There's fearless, and then there's reckless.
"The big downside of the plan to infuriate an emotionally traumatized psychopath into trying to kill me was part two, where the lunatic actually did it."
—Harry Dresden, The Dresden Files, "Skin Game"
Advertisement:

You'd think the opposite of Gone Horribly Wrong would be a good thing, right?

Rather than have something unexpected happen that sabotages the program, the researchers have everything proceed in an orderly fashion. The results are everything they hoped for — better, in fact. Unfortunately, they've succeeded too well, and it's this success that dooms them. The result turns out to be too intense, too powerful, or the researchers didn't fully consider the consequences of what they wanted to do. Or, maybe they just made an awesome stealth device... that they can't find because they can't see it.

Sometimes the results are a runaway chain reaction that threatens to destroy the facility/city/region/country/continent/world/universe, a weapon that not only annihilates its target but has high (or total) collateral damage, or a Psycho Prototype that obeys orders, only too well. Other times, the instigators find out the result was something they shouldn't have attempted in the first place. The Potential Applications were so exclusively in the evil/destructive side that the project had no possible use but to destroy.

Things that have Gone Horribly Right might not be immediately apparent. The researchers may create and market an entire product line based on their Super Prototype that only later turns on them, or over-performs its duty like, say, a genetically engineered plant that has a high CO2 consumption out-competing every other plant on the planet and causing massive fires to keep feeding. Usually, this is paired with a Fantastic Aesop that (heavily) implies the intended use or goal of the research is to blame.

This trope may be most succinctly captured in Jurassic Park, and directly spelled out in Aesop fashion, with Ian Malcolm's line "Yeah, yeah, but your scientists were so preoccupied with whether or not they could that they didn't stop to think if they should."

A Sub-Trope of Literal Genie, putting it in the scientific category as opposed to Be Careful What You Wish For, which is when what the character wanted falls in their lap through coincidence or magic rather than their own planning and hard work. A Supertrope to The Genie in the Machine, where the machine does exactly what you told it to. Since Love Potions never work, any one that "works as intended" will usually end up in this category. Often overlaps with Dangerous Forbidden Technique. Compare with Springtime for Hitler, What Could Possibly Go Wrong?, Nice Job Breaking It, Hero or Hoist by His Own Petard. Didn't Think This Through often follows the realization of this trope. May become a Game-Breaker. A form of invisibility that the creators now can't find because it's invisible could be considered Useless Useful Stealth. Sometimes goes hand in hand with A Lesson Learned Too Well.

Blu impresses everyone as he shows off his killer skills at the aerial football match and despite Roberto trying to warn him and Eduardo shouting at him to pass the ball to Roberto he is tricked into scoring the decisive point in his own team's net.

Blu impresses everyone as he shows off his killer skills at the aerial football match and despite Roberto trying to warn him and Eduardo shouting at him to pass the ball to Roberto he is tricked into scoring the decisive point in his own team's net.