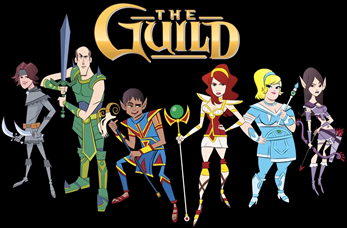 The Guild is an online Vlog Series-style sitcom created by Felicia Day of Dr. Horrible fame (and credited by Joss Whedon as a large inspiration) after a two year addiction to World of Warcraft. Each three to eight minute episode centers on "The Knights of Good", an online guild in an MMORPG similar to World of Warcraft.

Recognitions include winning the 2007 Youtube Video Award and the 2008 Yahoo Video award. You can keep up with the series at its official website, watchtheguild.com.

; it took the top #3 spot in the US iTunes chart and the #1 in the UK on the day of its release. For their fifth season's launch on Youtube, they released "I'm the One that's Cool", here

After the sixth and final season finished, it was announced that the show was spinning off into a Dark Horse Comics series.