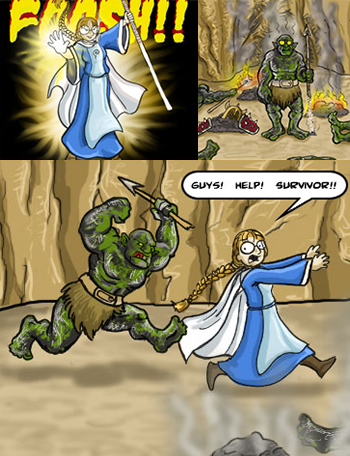 The fact that you can warp reality does not change the fact that you're still just a puny dork in a dress.
"Well, I'm terribly sorry I spent my extensive lifespan unlocking the means to unravel the universe and reshape it according to my will rather than, say, jogging. It has a tendency to leave one relatively fragile."
— Vaarsuvius, The Order of the Stick
Advertisement:

It seems that many who possess great magical, mental, or otherwise mystical might are also in the worst of shape. They may be sickly, horribly ill, crippled, or just physically weak and puny; in general, people who have reality-bending powers seem to suffer for it in other areas.

There are usually reasons. Powerful psychics may suffer from this, as they can do anything with their minds — for what do they need their bodies? It may also be the result of a magical Old Master experiencing the declining health that comes with age. Alternatively, physical health can sometimes be traded for magical power, be it through a bargain of some sort or the use of very draining magic... or it may be more mundane: rather than go outside or exercise, the magicians spent all their time studying spells, and are thus very weak physically.note As well as usually very far from being good at weapon usage. From a Doylist POV, it's about game balance. Without their physical weakness there often wouldn't be any reason not to use them.

In terms of characterization, this trope creates a duality and contrast with the strong, stupid guy. Since Squishy Wizards tend to focus on powerful offensive attack spells ("Nuking"), they are also contrasted by The Medic, a form of Squishy Wizard who focuses on healing and defensive magic to stand in for their frail defense insteadnote The medic may not necessarily be physically weak, but the Medic is often simply forbidden from even carrying weapons, let alone engaging in combat. Squishy Wizards, because of their fragility, are often paired up with fighters in a Sword and Sorcerer ensemble or part of a full-blown adventuring party.

In addition in combination with the concept of Draw Aggro, this was one of the biggest contributors to the standard Damager, Healer, Tank party formation as seen in many MMORPGs — because characters that can nuke the hell out of the opposition and heal allies are usually the squishiest members of the party. The Stone Wall, who can withstand aggro and keep it off the others, was created to keep these squishy party members alive during those big battles.

Even when Linear Warriors, Quadratic Wizards applies, the wizards are usually just quadratic in offense, not defense.

This trope is distinct from Disability Superpower, in that the power in question is not necessarily making up for the disability; rather, this trope refers to the lack of physical prowess that tends to accompany mystical powers.

In game mechanic terms, the Squishy Wizard is usually a Glass Cannon, being able to dole out big hurt but generally dying if a tough monster looks at it funny. Although the Squishy Wizard is sometimes not completely a Glass Cannon. They can have decent, or even good magical defense, to tank other wizards' (or a monster's) spells, but fall quickly to a single punch. On the other hand, some Squishy Wizards skip out on the 'cannon' part, providing powerful party utility (by empowering/healing allies, weakening/disrupting enemies, and so on) instead. This further encourages you to keep them out of the line of fire by making other people better at taking it/dishing it out for them.

It should be noted that not every wizard is squishy. In fact, one way to reduce squishiness is to simply give them some armor, and there's all kinds of armors. In fact, if say, a mage's magic doesn't work while wearing something like plate armor made from steel, there's the armor known as the gambeson, which is made from layers of linen, is fairly light, and is good against most types of mundane weapons, acting like the kevlar of the medieval world and prior. Of course, if even this proves to be too much, then a good wooden shield could do the job. Then there's just plainly enchanting the robes they already wear. Also, since a lot of magic users (depending on the setting) carry staffs that help them to focus their powers, there is almost no reason why they can't use their staffs (which are just big sticks) to whack some sense into the heads of would-be attackers, or just plainly knock them senseless. See Combat Medic, Magic Knight, and Kung-Fu Wizard.

Contrast Magically Inept Fighter, who are strong physically but weak with magic, and Magic Knight, Kung-Fu Wizard, and sometimes Mage Marksman when mages are capable of holding their own without magic. Compare Armor and Magic Don't Mix, Blind Seer, Waif Prophet, Black Mage, White Mage, and Shoot the Mage First, and Weak, but Skilled. Corollary to Magic Is Mental.