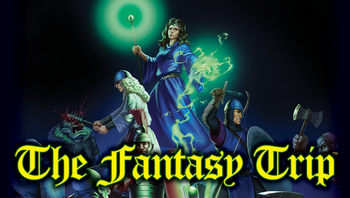 The Fantasy Trip was Steve Jackson's first Role-Playing Game. Starting with Melee in 1977, later expanding with Wizard (which added magical combat), the rules started out as a simple yet tactical set of combat rules. When In the Labyrinth came out, the rules expanded to a full-on RPG — one of the earliest RPGs, along with Dungeons & Dragons and Tunnels & Trolls, in 1980. For a while, The Fantasy Trip was the second-best selling RPG of all time.
Advertisement:

Unfortunately, Metagaming went out of business only a few years later. Steve Jackson tried to buy the rights to the game, but instead went on to his new company, Steve Jackson Games, and wrote a set of rules that was, more or less, The Fantasy Trip Advanced.

Despite being out of print for almost three decades, The Fantasy Trip still had a cult following. Its rules are viewed by its fans as a more elegant version of GURPS, as the rules were very simple and focused on fantasy. There have been conversions to other settings on the Internet.

to the eight TFT releases he'd written himself (Melee, Wizard, Death Test, Death Test 2, Advanced Melee, Advanced Wizard, In the Labyrinth and Tollenkar's Lair), and in July-August 2018 there came a Kickstarter

for a boxed set including all of the releases. The new edition was published in due course; see its official Web site

for details of its current status.