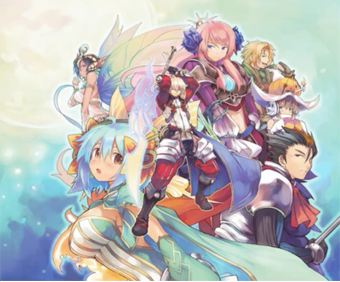 Luminous Arc 3: Eyes is the third game in the Luminous Arc Turn-Based Strategy series by Imageepoch. It was released in Japan in 2009, but not localized for other markets. A Fan Translation patch has been released in December 2021

The story focuses on the war between humans and monsters known as "Felicia" (instead of Witches, contrasting the previous two games) over the power of the (non-human) Eyes, which grant humans the gift of magic.

Lefy, who has the power, enrolled in the academy for Magi Knights after Reinhardt, a Felicia, kills his childhood friend while he (Reinhardt) is searching for the power of the Eye.

The Dating Sim elements are more involved and affect battles. When Lefy becomes close enough to a certain character, he'll receive a Zodiac Card, which will allow a powerful Unison Strike attack when that character is adjacent to Lefy in battle.

Like the previous games, it'll support online battles and have an anime opening.