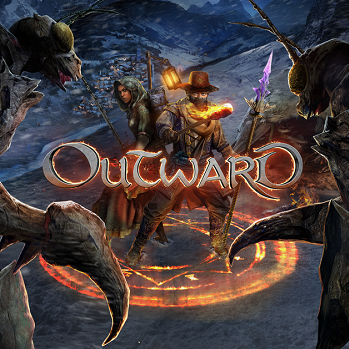 Outward is a Western RPG with a Wide-Open Sandbox world, developed by the Canadian Nine Dots Studios, and released on March 26th, 2019 for PC, PS4 and Xbox One.
Advertisement:

It is set in a Low Fantasy realm of Aurai, a setting that can be described as a cross between Dark Souls and Kingdom Come: Deliverance, with its combat system and world-building being largely inspired by the former, and possessing the same sort of Survival Sandbox elements as the latter. It can also be played alone, or in co-op.

The player begins as a shipwrecked castaway, who is rescued from Chernonese coast, but must now repay a blood debt to the Cierzo city within five days, or be kicked out. They may succeed or fail; either way, they will have managed to attract the interest of the world's three dominant factions, the Blue Chamber Collective, the Holy Mission of Elatt or the the Heroic Kingdom of Levant, who are all hoping the player will join them and finally turn the ongoing stalemate into their favour.

An Updated Re-release, Outward: Definitive Edition, was released in May 2022.