Video Game / Of Orcs and Men 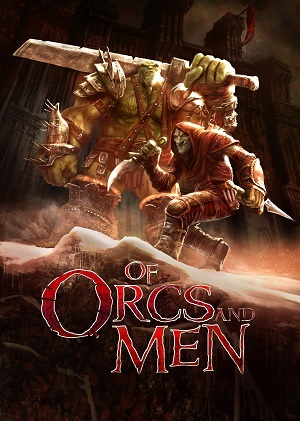 "Over the decades of conflict, the orcs were already beginning to figure it out: they were much sought after for their strength and toughness, and so, grinding slavery was always gonna be the result. Submit, or die. Needless to say, for a goblin like me, things were gonna be just as bad... We were there to be had like rats in a trap. Yeah, it's not easy bein' a greenskin on this fucking continent... You've got my sympathy if that's your case."
— Styx
Advertisement:

An alliance of human kingdoms. An evil horde of orcs and monsters assailing it. A mighty hero rising up to save his beleaguered people. Anyone with even a fleeting grasp of fantasy stories is all too familiar with this old setup. Well, what if, for once, the humans and the orcs switched places?

Of Orcs and Men is an Action RPG developed by Cyanide Studio and Spiders. The plot follows an orc named Arkail who seeks to assassinate the leader of The Empire of Men, who have slaughtered and enslaved his people; he's accompanied by Styx, a self-proclaimed "survivor" and the only goblin known to show any intelligence.

A spin-off, Styx: Master of Shadows, was released on October 7, 2014. Taking place before the events of the game, it is a Stealth-Based Game focused on Styx as he steals a magical artifact from humans.

After the relative success of Styx: Master of Shadows, Cyanide Studios announced a Sequel Styx: Shards of Darkness, promising "more ambition", a "bigger budget", and a "new engine", was released in early 2017.

Of Orcs and Men provides examples of: