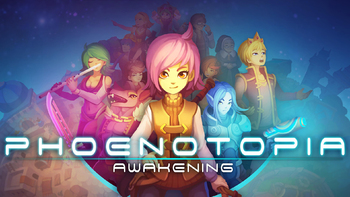 Centuries ago, the Earth saw a war of unseen before proportions. Humanity nearly tore itself apart as they used both machines and biological weapons to do their best to destroy each other. When all hope of peace seemed lost, a final weapon was unleashed: the Phoenix, which ended the Great War in a single night. However, it was too late to save the planet, and the Earth was rendered nearly uninhabitable to humans. The survivors went into hiding in metal vaults, ready to exit them once the earth recovered.

Today, Earth did indeed recover, and the descendants of the survivors live in quasi-medieval kingdoms on the surface. Gail, an orphan girl living in the farming village of Panselo, is tasked with bringing home for dinner the kids that went playing in the nearby forest... narrowly escaping aliens abducting everyone that was still in the village. As the oldest of the people left behind, Gail must go on a journey to find out what happened to the villagers. The only clue left behind? The mysterious, broken head of a robot that crash landed in the forest earlier in the day...

Phoenotopia : Awakening, released on August 20, 2020, for the Nintendo Switch, is a remake of the 2014 flash game simply called Phoenotopia. Created by studio Cape Cosmic, it is a 2D action-adventure that draws inspiration from Cave Story and The Legend of Zelda series. In addition to improved graphics and music, the remake makes many additions to gameplay, including making the world map free-roaming rather than restricted to just the levels, the ability to fish and to cook food to increase its effectiveness, and altered story elements. The game was later released on Steam on January 21, 2021.