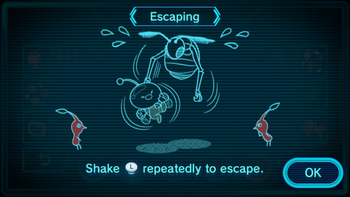 You're walking down a narrow corridor and everything looks normal, when BAM! A huge monster, insane psychopath or malevolent spirit grabs you from behind and you can't move. How do you break free?

Smashing Survival is where in order to break free of an enemy's grip or shake loose from a trap you fell into, you have to either smash the buttons, frantically spin the analog stick, or a combo of both. This element can be OK when used sparingly, but if used for every enemy or simply used too much, say hello to broken controller buttons/sticks and finger cramps. Wrist cramps can occur as well if this trope is used for the waggling effect on the Wii or PS3 controllers.

As a result of the this, and in particular for accessibility reasons, several high-profile games such as Uncharted 4: A Thief's End, God of War (PS4) and Spider-Man (PS4) allow the player to switch out the button mashing for simply holding the button down.note Uncharted 4 is the instigator of this: after Naughty Dog's interface designer heard that Josh Straub, the editor-in-chief of DAGERS, couldn't beat Uncharted 2: Among Thieves due to his physical disability preventing him from opening doors at the end of the game, she ensured that Uncharted 4 offered a less strenuous alternative.

Unless the AI programmers were tasteful, expect computer players to be ridiculously good at this.

Not to be confused with Button Mashing, which is a Super-Trope for this and covers a wider variety of scenarios (mainly noobs pressing the buttons at random in the hopes of compensating for their lack of finesse).

Subtrope of Press X to Not Die.

Spam A to push away Olly's attack.

Spam A to push away Olly's attack.