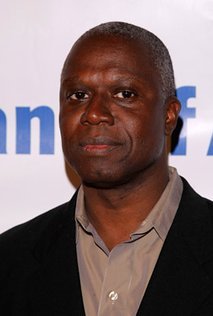 Andre Braugher (Born July 1, 1962 in Chicago) is an American movie and television actor. He has a background in Shakespearean theater and attended the Juilliard School's Drama Division graduating with a Master of Fine Arts degree.

His first movie role was freed, educated black man Cpl. Thomas Searless in Glory. His Star-Making Role was as Ensemble Dark Horse Det. Frank Pembleton in Homicide: Life on the Street which he won multiple awards for. Braugher had a resurgence in popularity when he became a recurring guest character in House playing House's therapist Dr. Darryl Nolan. Despite the fact the episode he debuted in was a massive Genre Shift (having absolutely no medical jargon whatsoever) and fans were split on that, Braugher's performance was universally praised. He was also a main character on Brooklyn Nine-Nine, where he played The Comically Serious Captain Holt.