Series / Men of a Certain Age 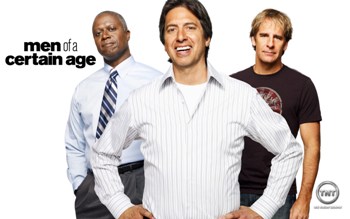 A Dramedy on TNT network starring Ray Romano, Scott Bakula, and Andre Braugher, focusing on the lives of three best friends (since their teenage years) who are middle aged. Much of the show's drama involves the men dealing with the issues brought on by their middle age, but there are other sources of tension as well, such as Joe's gambling addiction, Terry's commitment issues, and Owen's often-strained relationship with his father.

The series was conceived by Everybody Loves Raymond star Ray Romano (who not long after the landmark sitcom ended had speculated about the possibility of one day doing a show on cable) and Mike Royce (who had been on the production team of Raymond). Also returning from Raymond is Joe Manfrelotti (Gianni on Raymond) as the bookie that Joe (Ray Romano) often deals with.

The show is quite good, and has been hailed as one of the most honest shows about middle age, dealing with many realistic frustrations, quirks, and humor that real-life "men of a certain age" often experience.

It was cancelled after two seasons.

Tropes of a Certain Age: