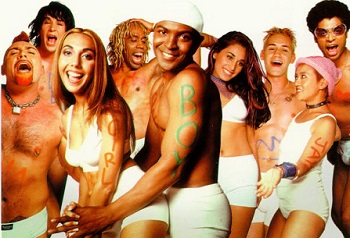 Metrosexuality is a little known British short series of 6 episodes (+ the pilot) written, directed and produced by Rikki Beadle-Blair in 2001.

The show is a slice-of-life dramedy about a community of people of various ethnicities and sexual orientations.

Kwamé, on one hand, is devising ways to get back his crush Asha since he screwed up his first time with her, all while trying to help his friends with their own relationships, keeping a relationship with his mother and trying to get his father back with his ex-boyfriend.

His father, Max, is pretty much his friends' caretaker and likewise helps them with their own relationships and life trials, even his straight friends who often come to him for advice on life in general.

The show addresses many issues including how children of queer parents relate to them and to the world around them, how Gays & Lesbians relate to each other in Real Life, how Straights can relate with LGBT people without aggressivity or how manhood and femininity can be endorsed by Gays & Lesbians respectively. Also present are the issues of racism, homophobia and, unusual for this kind of show, heterophobia.

In those aspects, the series is quite notable for defying, deconstructing and inverting many conventional tropes found in LGBT shows and isn't afraid of portraying some aspects of queer culture in a very critical way, and as such comes across in a rather realistic depiction of the lives of LGBT people.

Metrosexuality is self-contained despite its shortness and isn't scheduled for any sequel.