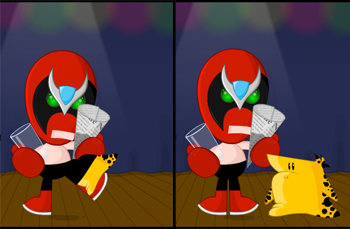 Be grateful he was just in the leg.
Ray Kowalski: You're empty handed.
Fraser: Yes, but I am not empty trouser-ed.
— Due South
Advertisement:

Basically a Hammerspace spot where the sun don't shine. Can be Nightmare Fuel for some, usually for the characters watching more than the audience.

Women can pull this trick too, with their own... implications about it. Also can be done whether it's pants or a skirt.

When the Trouser Space region is explicitly the character's rectum, then that's an Ass Shove. When the item retrieved is a gun, then it's a Pants-Positive Safety, and may be part of an Extended Disarming.

Not to be confused with Magic Pants, or, despite being the trouser version of Hammerspace, Hammerpants.