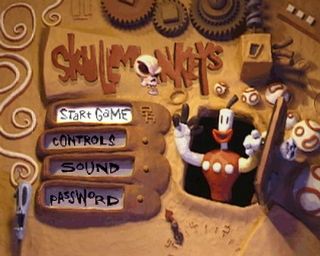 Remember Klogg being thrown into space after the events of Neverhood? You think he'd be lost forever, floating around the orbits of unknown planets and not harming anyone?

You've almost got it right. Almost.

The aforementioned villain returns as Kloggmonkey, and proclaims himself ruler of all Skullmonkeys on planet IDZNAK simply by wearing a skull and a monkey skin. He then forms a pretty simple plan to take revenge to The Neverhood: force his newly-acquired minions to build the so-called Evil Engine Number Nine. One of the Skullmonkeys, Jerry'O, however, being much more intelligent than the rest of his kind, is unswayed by Klogg's lies. In a desperate bid to save his world, Jerry'O uses a flying bird machine to summon Klaymen...

...Who has no idea what's going on here.

Skullmonkeys is The Neverhood's claymation sequel to their eponymous game, released by Electronic Arts exclusively for the PlayStation in 1998. It's not an Adventure Game anymore, though: now it's being a Platform Game done in aesthetics and wackiness closer to the original The Neverhood and slightly to Earthworm Jim, only with buffed-up difficulty, more areas to explore and less gameplay differences between each level (which also counts for Unexpected Gameplay Changes too): the whole thing relies on platforming, running and stomping the foe apes more than it does on shooting and carrying/escorting stuff from one point to another. It doesn't include a huge variety of powerups or stage hazards other than enemies and spikes, though, so what really makes Skullmonkeys challenging is its pretty hellish level design, which requires medium to little reaction time from the player to get on with.

The game itself turned out to be the last Neverhood installment to be officially released by TenNapel and his crew, bringing the entire series into stagnation. Until, that is, the announcement of its Spiritual Successor: Armikrog.