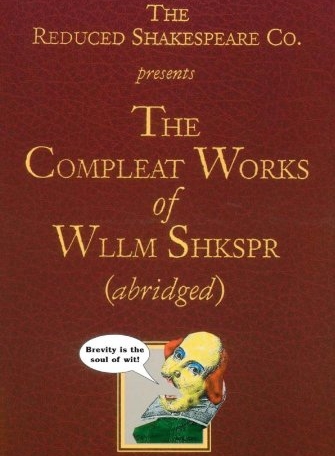 "Brevity is the soul of wit."
Advertisement:

Three actors (male in the video and the original troupe), with the use of costumes, bad wigs, and more wordplay and slapstick comedy than you can shake a rubber skull at, reenact the entirety of the works of William Shakespeare within the time frame of a two-act stage play. Hilarity most DEFINITELY ensues.

This was created by the Reduced Shakespeare Company (the specific original writers being Adam Long, Daniel Singer, and Jess Winfield), but has since been sold/given to/adapted by a wide variety of comedy troupes and theatre companies.

The play has No Fourth Wall, requires performers to make it up as they go, and audience participation. This means the likelihood of two shows (even from the same company of actors) being the same twice is very low, if not outright impossible. Unusually for a modern play, performers are not under contract to be as true to the script as possible after acquiring performance rights.

That said, the script has three roles named for the actors who originally performed the piece: Daniel (the troupe leader), Jess (the scholar/serious actor), and Adam (comic relief; plays nearly all the female parts). Actors usually perform using their names, since the script occasionally has them address or refer to each other.

Amazingly, the play uses just about every Abridged Series Trope despite predating the genre by 19 years.