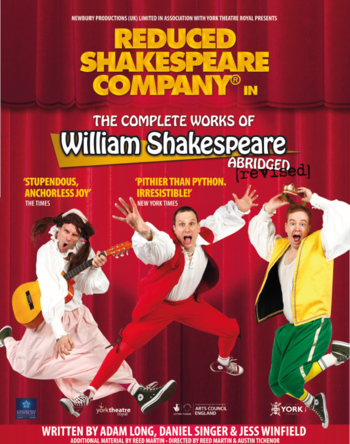 "We think old Bill's too stuffy, he needs to loosen,
So we take his boring plays and we reduce 'em!
The poetry, the subplots, the imagery that's illing,
And we get right down to the sex and killing!"
—"We Take It OTT (The RSC)" from The Reduced Shakespeare Radio Show
Advertisement:

The Reduced Shakespeare Company is an American comedy group founded by Daniel Singer, with the initial members being himself, Adam Long, and Jess Borgeson (today Jess Winfield). They specialise in taking vast bodies of work (not limiting themselves to Shakespeare), that would take days to see in their entirety, whittling them down to the bare essentials, then whittling them down a bit further and filling the gaps with jokes. They arguably invented The Abridged Series formula, also heavily employing The Abridged History.

Their members can be blamed for producing these plays:

They also made The Reduced Shakespeare Radio Show for The BBC World Service, which was The Complete Works of William Shakespeare (abridged) reformatted into six half-hour radio episodes (examples for the radio show are currently placed in the main Shakespeare show's page). Although not strictly RSC shows, founder Adam Long made four Reduced-style quarter-hour shows for BBC Radio 4 about British politics under the title The Condensed History of... (the three main parties and Big Ben).