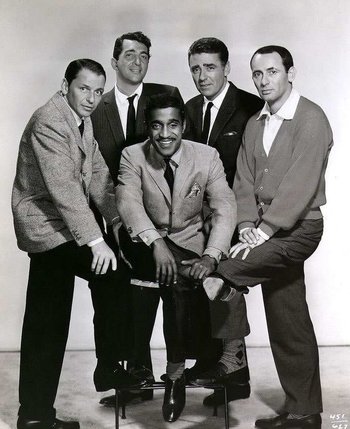 Remember that gang of cool kids at school you wanted to hang out with, but weren't cool enough to do so? This was the grown-up, showbiz version of that.

Originally, it was a loosely defined and informal group of actors (and a few actresses) that sprang up in the Fifties, centred on Humphrey Bogart. According to long-standing Hollywood legend, Bogie and his buddies (Frank Sinatra, David Niven, Swifty Lazar (Bogie's agent), etc) came home around dawn after a hard night in Las Vegas, and Bogie's wife, Lauren Bacall, said, "You look like a goddamn rat pack!"

Following Bogie's death in 1957, the group coalesced around Sinatra, who became the de facto leader. While he always had an entourage which was to all intents and purposes a support crew, he particularly enjoyed the company of fellow-performers, and the Rat Pack served this purpose for him. The other four core members were therefore his friends who were also fellow-performers — Dean Martin and Sammy Davis Jr., along with the actor and socialite Peter Lawford and comedian Joey Bishop. The likes of Angie Dickinson, Shirley MacLaine, Marilyn Monroe, Buddy Greco and Don Rickles were all associated with the Rat Pack, sometimes being referred to as "Rat Pack Mascots"; Rickles later commented that: "I never received an official membership card, but Frank made me feel part of the fun."note Rickles' career really took off when he noticed Sinatra in the audience at one of his comic shows and proceeded to bust his chops; Sinatra thought the whole experience was Actually Pretty Funny.

The Rat Pack were legendary for their Las Vegas performances, which were seldom scheduled in advance; sometimes, what was advertised as a solo performance by one of them became a group act if one or more of the others happened to be around, or they'd crash the stage when someone else was performing and more or less take over. Their peak was perhaps the three-week period in 1960 during the filming of Ocean's 11, when the Copa Room at the Sands Hotel and Casino (which was used as a filming location for the movie) became the place to be as the movie's stars — Frank, Dean, Sammy, Peter and Joey — performed on stage together at night after the day's filming had wrapped up. Scoring a ticket for the "Summit at the Sands" was like winning the lottery. Everybody who was anybody showed up, and audience members were frequently incorporated into the act. Unable to guarantee exactly which of the Rat Pack would be on-stage on any given night, the Sands took to displaying a billboard which proudly presented:

The group had a reputation for heavy drinking and womanizing — Tony Bennett once said that the reason why he wasn't in the Rat Pack was that he couldn't keep up with them. Joey, though, downplayed this in a 1998 interview: "I never saw Frank, Dean Martin, Sammy or Peter drunk during performances. That was only a gag! And do you believe these guys had to chase broads? They had to chase 'em away!"

In terms of race relations, the Rat Pack are considered to have been influential in causing Vegas to become one of the first cities in the USA to fully desegregate, thanks to Frank and the other white members refusing to stay or perform at any hotel that would not allow Sammy to stay there.

In 1960, the Rat Pack campaigned actively for presidential candidate John F. Kennedy, whose sister was married to Peter — hence Frank's nickname for him, "Brother-in-Lawford". Relations were rarely easy, though — Sammy was uninvited to JFK's inauguration ball on account of his recent marriage to a white actress, and there was a wariness, particularly on the part of Bobby Kennedy, about Frank's supposed Mafia ties which have long been rumoured to have been used to the Kennedy campaign's advantage. Things came to a head in 1962 when plans for JFK to stay at Frank's Palm Springs home during a tour of the West Coast were called off at short notice; Frank, who'd been bragging about the President's forthcoming visit to just about everyone and had even gone to the trouble of building a helipad in anticipation of it, was furious. This resulted in a quick ticket out of the Rat Pack for Peter, who Frank blamed for not interceding with the Kennedys on his behalf — the only time the two ever spoke again was when Frank asked him to get Bobby Kennedy's help when his son was kidnapped.

By the late 1960s, the Rat Pack had more or less unofficially disbanded, although an attempt was made to revive it in 1987 with the Together Again tour featuring Frank, Sammy and Dean. Dean's heart wasn't in it, though (he was devastated by the death of his son in a plane crash earlier that year), and he quit after five shows. Frank and Sammy subsequently continued the tour under the new title The Ultimate Event, with Liza Minnelli replacing Dean as the third member of the trio.

It is worth noting that Frank absolutely hated the term "Rat Pack", because he deeply resented being associated with rodents; instead, he frequently insisted on using terms like "The Summit" or "The Clan" for the group note  although the latter term was practically a non-starter due to it being reminiscent of the, err, Klan. Years later, he would admonish journalists for using the term "Rat Pack", referring to it as "that stupid phrase". It stuck, though.

The Rat Pack is the reason why a group of actors, singers or other celebrities who gain fame or notoriety together sometimes gets referred to as the "[word that rhymes with rat] Pack" — for example, the Brat Pack, the Frat Pack and Eli Roth's "Splat Pack".

A 1998 TV movie biopic, The Rat Pack, starred Ray Liotta as Frank, Joe Mantegna as Dean, Don Cheadle as Sammy, Angus Macfadyen as Peter, Bobby Slayton as Joey and William Petersen as JFK. Cheadle, who would later star in the remake of Ocean's 11, won a Golden Globe for his performance.

It's also the name of an episode of The Sopranos, the title referring to a painting of Frank, Sammy and Dean which Jack Massarone gives to Tony.

Films starring more than one member of the Rat Pack include: