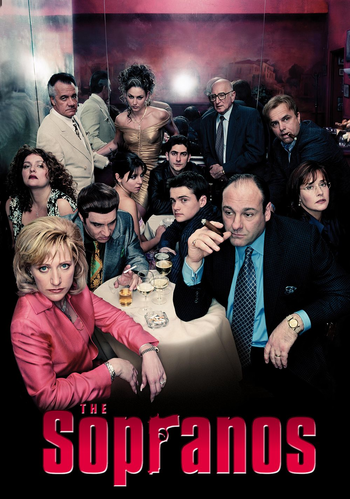 The Sopranos is a deconstructive Criminal Procedural series created by David Chase. Its Pilot Episode was shot in 1997, and the show premiered on HBO in the United States on January 10, 1999, concluding its original run of six seasons and 86 episodes on June 10, 2007 with one of the most infamous endings in American television historynote see the WMG page for various interpretations.

The series is centered around North Jersey mob boss Tony Soprano (James Gandolfini), who after a panic attack secretly begins seeing a therapist. Hilarity and Reality Ensues as his therapy coincides with him sending his troublesome, sociopathic mother Livia into a nursing home when it becomes apparent that she's no longer able to take care of herself.

From there, the series focuses on Tony's problematic dual families: his biological family — long-suffering wife Carmela, straight-A student daughter Meadow, underachiever son A.J., and equally morally bankrupt sister Janice — and the organized crime family he is involved in, who include his bitter uncle Junior, his 'nephew' (actually his wife's cousin) Christopher, and more.

A Licensed Game called The Sopranos: Road to Respect, set between between seasons five and six, was released in 2006.

A prequel film, The Many Saints of Newark written by David Chase, was released in 2021. Taking place during the Newark riots in the 1960s, the film stars Jon Bernthal as Tony's father Johnny Boy Soprano, Vera Farmiga as his mother Livia Soprano, Alessandro Nivola as Christopher's father Dickie Moltisanti, and Gandolfini's son Michael as a young Tony. Chase and series writer Terence Winter have discussed the possibilty of additional prequels to the show

, contingent upon the success of Many Saints.

The Film-Within-The-Show Cleaver has its own work page.

open/close all folders
A-G
H-M
N-S
Corrado "Junior" Soprano was based on Giovanni "John the Eagle" Riggi, who became boss of the DeCavalcante crime family after Sam DeCavalcante stepped down in 1982.
T-Z
"Don't stop believin'..."
Feedback