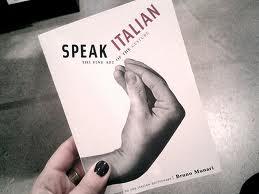 "Be handy, be Italian!"
How do you give an Italian a speech impediment?
Break one of their arms.
— Old joke
Advertisement:

It's an old and well-established stereotype that Italians gesticulate wildly whenever they talk. This is entrenched enough in western culture that it is sometimes used to communicate that a character is indeed Italian — if you have an Italian character (or a character with Italian origins) and you want to point it out clearly, you're probably going to have them gesticulate every time they say something relevant.

While often exaggerated in fiction, this is not just a stereotype, and it is a fairly common practice in Italian culture to accompany speech with various gestures and hand and arm movements. This isn't strictly Italian, though, the custom being common around the Mediterranean (Greeks, Lebanese, Spaniards and Egyptians are all widely noted for their fondness for gesticulation), owing to a long history of trade and other interaction between peoples who speak different languages (gestures can get a message across well even with the most limited of speech). However, note that, besides the fact that movies wildly exaggerate the whole thing, many Italians don't actually gesticulate any more or less than anyone else; needless to say, this trope tends to annoy them quite a lot.

This is a common theme in Italian comedies, and of course in virtually any movie about the Italian Mafia.

Not necessarily related to Signed Language.

He adds gestures to his words sometimes.

He adds gestures to his words sometimes.