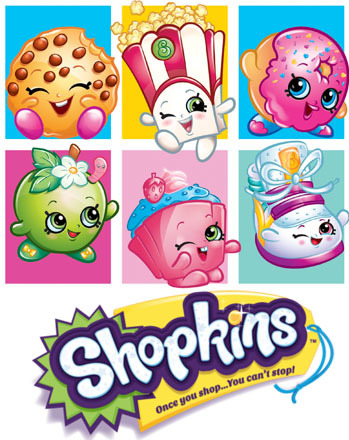 Shopkins is a girl’s toyline by Moose Toys, the creators of The Trash Pack. Like The Trash Pack, they are blind-bagged characters of various creatures, only, in this case, cute groceries and other shopping materials, with the two series also sharing a universe (although this has only been touched on by supplemental commercials).

Shopkins takes place in Shopsville, a little outlet mall area where the Shopkins hang out and have adventures with each other.

Series 4 of the series introduced Petkins, which are Shopkins that have animal-like features over human ones. Around the same time, the spin-off of Shoppies were introduced, fashion dolls that have Shopkin-based accessories.

An Animated Adaptation exists in the form of web cartoons, as well as three OVAs focused on the Shoppies.