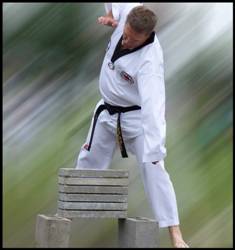 Martial artists showing they can break bricks and/or boards with a single barehanded blow because they're martial artists. They often Kiai while doing so.

The fancy version of this is to break not the first object you hit, but the one behind it, or a specific one in a sequence. Thus demonstrating you have not only brawn, but control. The usual subversion is for someone to hurt their hand after failing to break the boards/bricks. Doing this at various levels of difficulty is often one of the criteria for advancement in rank. This can be taken to extreme levels in fiction, where characters are allowed to break the bricks with one finger or their minds or whatever.

For when a character doesn't break but literally cuts the blocks in pieces, see Razor-Sharp Hand.

Has nothing to do with LEGO bricks or Arkanoid. Definitely not to be confused with Bowel-Breaking Bricks. A Flying Brick presents somewhat more of a challenge.

The final panel is Gaston with his arm in a sling and Fantasio commenting on the toughness of military food.

Ray-Ray uses Plank in a brick-breaking karate demonstration, but Johnny stops him.

Ray-Ray uses Plank in a brick-breaking karate demonstration, but Johnny stops him.