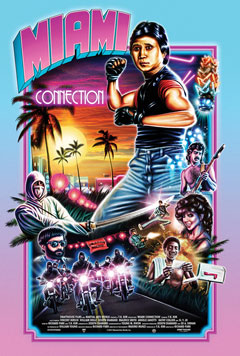 Friends through eternity
Loyalty and honesty
We'll stand together
Through thick or thin
Friends forever
We'll be together
We're on top
'Cause we play to win
— Dragon Sound, "Friends"
Advertisement:

Miami Connection is a martial arts film produced in 1987. It was the brainchild of director Richard Park and writer/producer/star Grandmaster Y.K. Kim (a Korean taekwondo expert and motivational speaker), who just wanted to make "a good film about Taekwondo" featuring authentic martial arts. Described by critics as a "cocaine-war- rock-ninja- motorcycle-gang film, with aspirations of being an action-adventure musical", Miami Connection was savaged during its initial run but enjoyed success as a cult film when it was restored and re-released in 2012 by Drafthouse Films.

In the year 1987, a shadowy band of ninja bikers led by the mysterious White Ninja has cornered the central Florida cocaine trade by ruthlessly eliminating their rivals. When Jeff, a thuggish gang leader and associate of the White Ninja, discovers his sister is dating the lead bassist of hit Taekwondo black-belt rock-band Dragon Sound, he teams up with the band's jealous rivals to destroy them. But Dragon Sound won't give in to evil and fight back, setting up an inevitable martial arts showdown with the White Ninja and the entire Miami Connection.

The official re-release trailer cut by Hobo With a Shotgun director Jason Eisener can be seen here.

On October 1, 2015, RiffTrax riffed the film live. The Cinema Snob has also reviewed it

In 2022, a retrospective documentary, Resurrecting the Dragon: Looking Back at Miami Connection, was created for the Vinegar Syndrome 4K / BluRay release, featuring interviews with the cast and crew about the movie's legacy.