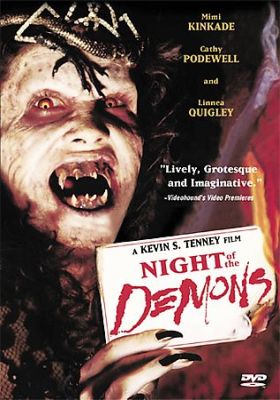 An invitation you can't refuse.
Angela is having a party, Jason and Freddy are too scared to come. But you'll have a hell of a time.
— Tagline
Advertisement:

Released in 1988, the movie features a group of teens having a Halloween party in the Hull House, an abandoned funeral parlor. Soon enough, demons within the house are awakened after a parlor game goes horribly wrong and they start possessing the party-goers one by one.

Not to be confused with the 1957 Jacques Tourneur film, Night of the Demon, or the 1980 Video Nasty of the same name.