Film / Men Behind the Sun 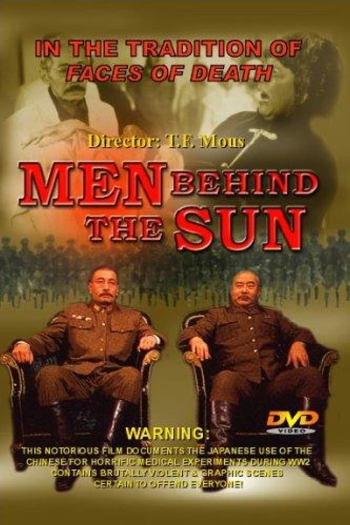 One of the most disturbing films to ever come out of Eastern Asia.

Released in 1988, Men Behind the Sun (Hei tai yang 731, The Black Sun Unit 731 in native Hong Kong) is a film about the Imperial Japanese Army's Unit 731, which during World War II conducted medical research and biological/chemical weapon experiments on captive human subjects. The film details many of the experiments carried out by the unit, and also follows a group of recruits to the unit's Youth Corps.

Men Behind the Sun is supposed to be a rather horrifyingly accurate depiction of Unit 731's activities in real life. However, the director based it on a fictional novel serialized in a Japanese Communist Party newspaper of questionable quality, to which can be traced the origins of many dubious facts regarding the Unit, as well as confusing the activities of Unit 100 with Unit 731. Whether the film is a cheap and horrific Exploitation Film or a valid commentary on the behavior of the Imperial Japanese Army is debated. Either way, it's guaranteed to utterly ruin your day.